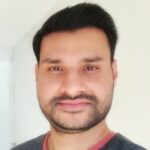 This post is my effort to elucidate inheritance in JavaScript, how and why it’s useful and all the moving part which make it work, and lastly how to mimic the classical inheritance model in JavaScript.

Functions are the first class objects in JavaScript, what does that mean? It means Functions get special treatment everywhere in the language. Let’s consider a very simple function as shown below:

As simple as the code written above is, it does fairy complex things underneath. “Function” is a global function and every function in JavaScript is an object of “Function” function, yes and that’s not a typo.

Things which happen after the above piece of code is called can be visualized as shown in the following diagram: 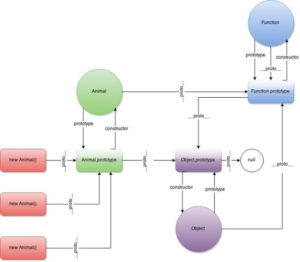 While reading further please keep in mind that,
a) All javascript functions have “prototype” property.
b) All javascript objects have an internal link “__proto__” and it refers to that object’s constructor function’s prototype. (Keep reading it will be clear).

Let’s go through the above diagram in a little more detail.

When we create a new object of function “Animal” using “new Animal()”, then a new empty object is created and “Animal.prototype” is set to its internal link “__proto__”.

In prototypal inheritance object inherit properties from object dynamically this is different from classical inheritance where Classes (blueprints of objects) inherit from other Classes.

That’s a very powerful feature of JavaScript and that makes it so cool.

We add “age” property to functions prototype. Next let’s create an object of this function using new keyword “person1”, and print out all the properties of person1 using the following piece of code:

Output or the above code is “name” unsurprisingly.
So we can see we have only “name” property in person1 object. Let’s run the following piece of code.

And we can see it does print out 24, so even though person1 object does not have “age” property, we can still access its value because its prototype has that property.

This is a pretty straight forward way of creating the inheritance, let’s create two objects x and y using object literals, and make x parent of y using Object.setPortotypeOf method, as shown in the code below:

That’s all that is needed to create working inheritance from one object to another. Here object y is derived from object x.

Let’s take the classic example of Employee and Manager inheritance. Here Employee is parent and Manageris child. We will write a very simple constructor function which represents the blueprint of Employee object as shown below:

In the next step, we need to establish the prototypal relation between Employee and Manager functions. Based on our understanding from earlier discussion, we know that we need to set internal link (__proto__) from child function’s prototype to parent functions prototype, let’s write a helper method to do exactly that, as shown below:

In the next step, let’s use this utility function to actually create the relation and create an instance of Manager:

Now mgr object inherits properties and behavior from the Employee and Manager both and you can access those as if they belong to the object itself.

As you can see, it’s not very intuitive and seems to be quite a lot of work to make classical inheritance work in JavaScript, but it’s certainly possible. Also ECMASCRIPT6 specifications does introduce concept of class in JavaScript however it’s just a syntactic sugar and the internal working still remains the same. JavaScript’s support of prototypal inheritance is one of the greatest features of it, and it certainly helps to know how exactly it works.