What is batch computing?

Batch computing means running jobs asynchronously and automatically, across one or more computers.

What is AWS Batch Job?

AWS Batch enables developers to easily and efficiently run hundreds of thousands of batch computing jobs on AWS. AWS Batch dynamically provisions the optimal quantity and type of compute resources (for example, CPU or memory optimized instances) based on the volume and specific resource requirements of the batch jobs submitted. AWS Batch plans, schedules, and executes your batch computing workloads across the full range of AWS compute services and features, such as Amazon EC2 and Spot Instances.

Why use AWS Batch Job ?

Jobs are the unit of work executed by AWS Batch as containerized applications running on Amazon EC2. Containerized jobs can reference a container image, command, and parameters or users can simply provide a .zip containing their application and AWS will run it on a default Amazon Linux container.

Jobs can express a dependency on the successful completion of other jobs or specific elements of an array job.

Jobs run in approximately the same order in which they are submitted as long as all dependencies on other jobs have been met.

Similar to ECS Task Definitions, AWS Batch Job Definitions specify how jobs are to be run. While each job must reference a job definition, many parameters can be overridden.

Some of the attributes specified in a job definition are:

Jobs are submitted to a Job Queue, where they reside until they are able to be scheduled to a compute resource. Information related to completed jobs persists in the queue for 24 hours.

Job queues are mapped to one or more Compute Environments containing the EC2 instances that are used to run containerized batch jobs.

Managed (Recommended) compute environments enable you to describe your business requirements (instance types, min/max/desired vCPUs, and EC2 Spot bid as x % of On-Demand) and AWS launches and scale resources on your behalf.

Alternatively, we can launch and manage our own resources within an Unmanaged compute environment. Your instances need to include the ECS agent and run supported versions of Linux and Docker.

AWS Batch will then create an Amazon ECS cluster which can accept the instances we launch. Jobs can be scheduled to your Compute Environment as soon as the instances are healthy and register with the ECS Agent.

Jobs submitted to a queue can have the following states:

There is no charge for AWS Batch. We only pay for the underlying resources we have consumed.

Poller service needs to be run every hour like a cron job which submits one or more requests to a processor service which has to launch the required number of EC2 resource, process files in parallel and terminate them when done.

We plan to go with Serverless Architecture approach instead of using the traditional beanstalk/EC2 instance, as we don’t want to maintain and keep running EC2 server instance 24/7.

This approach will reduce our AWS billing cost as the EC2 instance launches when the job is submitted to Batch Job and terminates when the job execution is completed. 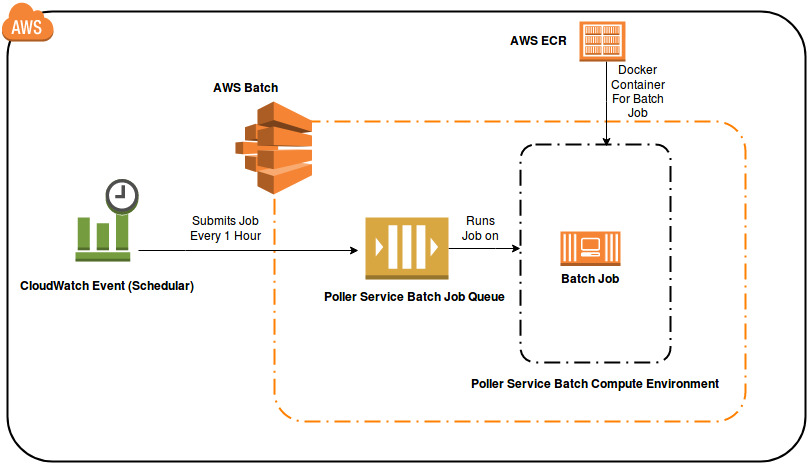 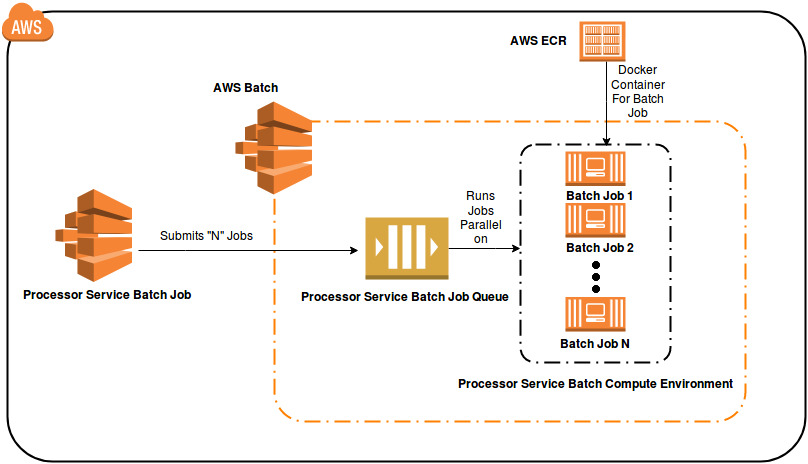 For Poller and Processor Service:

To automate above resource creation process, we use batchbeagle (for Installaion and configuration, please refer batch-deploymnent repository)

We must create a new revision of existing Job definition environment which will point to the new release version tagged ECR image to be deployed.

We will use AWS Batch event stream for CloudWatch Events to receive near real-time notifications regarding the current state of jobs that have been submitted to your job queues.

AWS Batch sends job status change events to CloudWatch Events. AWS Batch tracks the state of your jobs. If a previously submitted job’s status changes, an event is triggered. For example, if a job in the RUNNING status moves to the FAILED status.

We will configure an Amazon SNS topic to serve as an event target which sends notification to lambda function which will then filter out relevant content from the SNS message (json) content and beautify it and send to the respective Environment slack channel . 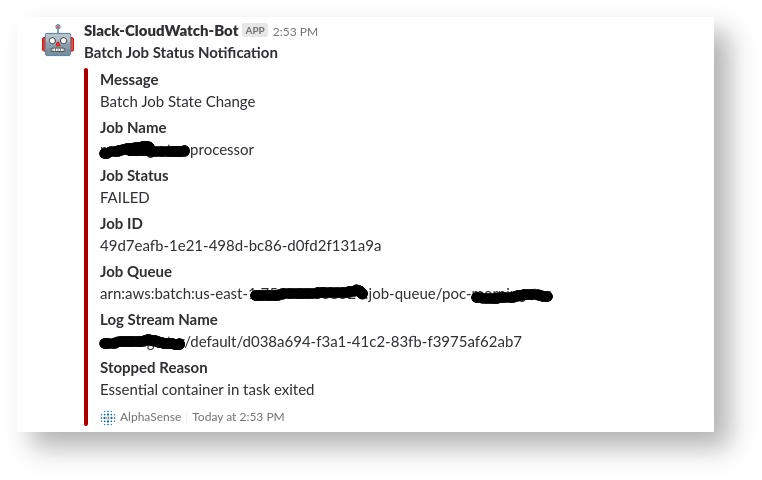