This reasoner derives additional statements by looking into the class/property definitions and their relations. For example if we have the below class hierarchy”

And the following RDF statement (Ram’s mother is Kausilya):

An ontology reasoner will derive another RDF statement (Ram’s parent is Kausilya):

A rule is a representation of knowledge in machine-readable form which a reasoner makes use of to derive additional information with existing information. For example the rule:
?person rdf:type , ?person >60, ?person ‘yes’, states that all person with age greater that 60 are senior citizens.
A rule-based reasoner applies such set of rules to RDF data and derives additional RDF statements. Rules can also be used to validate and secure RDF data.

Classification of Data from User’s perspective. 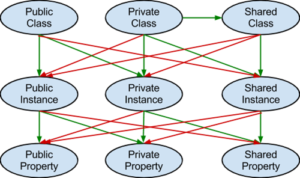 Users are not given direct access to objects but are given indirectly by means of roles.
Various roles are defined by the application based on accessibility criteria and objects are given access to one or many roles. Users automatically get access to the objects that their corresponding role has. Consider the below role definitions & accessibility rules illustrated as RDF graph. As per the illustration ‘Accounts’ is only accessible to ‘Ram‘ while ‘UserData’ is only accessible to ‘Sham’.

Users are given direct access to objects as illustrated in the below RDF graph. 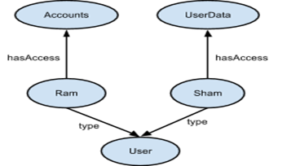 Explicit access is given to either private data or shared data in the RDF graph.

The property ‘hasAccess’ is attached to the private node with value as a node with type – ‘Person’. The below illustration shows a part of a graph where the private data – ‘Ram’s payslip’ has access only to Ram.

Sharing data in the RDF graph needs creation of a shared node whose links decide which node is shared by whom and for whom. For example, the below illustration shows that ‘Ram’ the owner of ‘Ram’s PaySlip’ has shared this node with ‘Shyam’.

Implicit access is given to only public data in the RDF graph. The property ‘belongsTo’ is attached to the public node with value as a node with type – ‘Role’ as illustrated in  figure 1.

The ‘belongsTo’ property is private data of ‘superUser’ so as to prevent users from mistakenly make their data public. Hence it can be attached to nodes only by the ‘superUser’ OR by a user with whom this property has been shared by ‘superUser’ (typically would be administrators).