This blog details the steps to build, deploy and maintain different versions of Lambda functions across various product stages such as development, testing, staging and production on multiple AWS accounts.

AWS Lambda is a compute service that lets you run code without provisioning or managing servers. AWS Lambda executes your code only when needed and scales automatically.

By default, developers work on the Lambda that is pointing to the $LATEST version. Once it is published manually through a console or through AWS Command Line Interface or through AWS SDKs, a new version is created automatically with an auto-incremented version number.

While publishing the Lambda, we can additionally set an alias to the Lambda to point to the stage where we want to publish the Lambda changes.

The iOS/Android/Web App invokes the AWS Lambda function through the ARN with appropriate permissions set via the IAM role as shown below:

In addition to the versioning maintained by AWS for each Lambda, there is a need to version the alias as well since there could potentially be older versions of the iOS app which would still need to invoke older Lambda functions. The schematic below explains alias versioning: 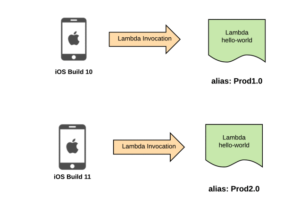 Apex is the serverless automation tool that provides a way to build, publish and maintain AWS lambda functions. The lambda functions must be defined as per the Apex standardized folder structure as described below:

project.json – configuration file that contains global variables that will be applied across all lambda functions included under the project:

Automated Deployment with Jenkins and Apex

Jenkins is an open source automation server which helps to automate the non-human part of software development process via continuous integration and facilitating technical aspects of continuous delivery.

Bringing it all together, we can configure each code submission to GitHub repository to trigger a build in Jenkins to invoke APEX Serverless commands to publish the Lambda function with the appropriate alias.

The schematic below describes the process: 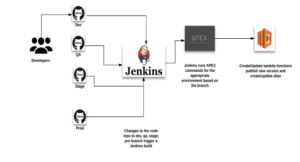 This automated deployment process frees up developers from worrying about complicated deployments of a serverless project and focus on what’s most important – building a world class app.

"Use full information on your Aws blog".