Use Xcode 8 with Jenkins

Talentica » Blogs » Use Xcode 8 with Jenkins

We have implemented continuous integration process so that we can detect errors quickly, and locate them more easily. This also helped us to reduce the time required for manual testing. The following frameworks/tools we have used for CI process:
UI Testing in Xcode:
Apple has provided UI testing framework supported from iOS 9 and above. We have used this to write the UI test cases in Xcode.
Jenkins:
Jenkins is an open source continuous integration tool. We have done a setup of Jenkins on Mac machine where the central build takes place.
Following is a flow of how Jenkins works:

You can find different sources for Jenkins setup and its configuration. Therefore we will not dig into that part. I will share two major issues that we faced in above setup.

Since JUnit plugin is not able to parse the Xcode 8 test report XML, we have used XCPretty mediator that converts Xcode 8 XML report into JUnit supported XML. XCPretty creates a JUnit-style XML report which is compatible with Jenkins. Installation steps for XCPretty are mentioned in above ref link.

Following is the syntax to use XCPretty option with xcodebuild:

Above command create JUnit-style XML report at build/reports/junit.xml in your projects root directory.

You can also provide custom path for output xml file like:

We have implemented above solution to support Xcode 8 in Jenkins.

Many of us have observed the issue that XCTest framework intermittently fails to launch the app with below error when you execute multiple test cases in a single run:

This is another major issue in the implementation of CI process for iOS projects. Because above error marks the test case as failed. We have tried many solutions but, didn’t find any working solution for this.

Syntax to run test cases in a particular class:

In this way, we have been running multiple sets of test cases in single Jenkins job instead of running all test cases together and before execution of each set, we are terminating current running simulator instance. 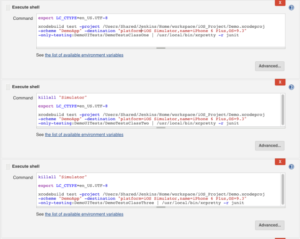 With this approach, we haven’t observed above error. I hope this will help you.

"Nice Article. In short description good explanation about the DevOps. Thanks For sharing the informative news.".

"Referring to '2 – XCTest fails to launch the app intermittently.' I run overall 12 test in two execute shells (in first 2 and second 10) and jUnit generate the result from last 10. Do you occur the same issue? How to resolve that? Best regards".