A grayscale image captures the intensity of light in pixels. In digital image processing, intensity values are discrete integers ranging from 0 as the lowest intensity or darkest, to 255 as the highest intensity or brightest. As opposed to RGB images with numerous color variations, disparity between darkness and brightness or namely contrast is the only distinguishing factor among pixels for grayscale images. Hence it is vital to have a good contrast to accurately capture information and better visualize features.

In this blog, we will deal with an example where contrast is low. We will then define histogram to measure and use a few techniques to enhance contrast. While aiming to capture edges as image feature, we will demonstrate the impact an image with a good contrast has on this process.

In illustration 1, we will detect the edges of each hexagon. To the naked eye, there is not much difference in intensity for most of the hexagon edges and pixels inside a hexagon. Mathematically, we can measure the distribution via a histogram. 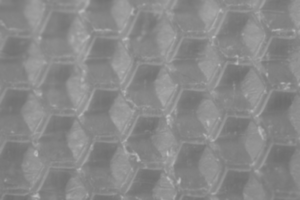 Histogram captures the number of entities with the same value. For a given grayscale image, histogram of intensity will capture the number of pixels with intensity values of 0, 1, 2 ….. , 255.

Illustration 2 represents the histogram for illustration 1. Clearly, almost all of the pixels have values concentrated from 120 to 160. This proves why there is no visible difference between edge and non-edge pixels. 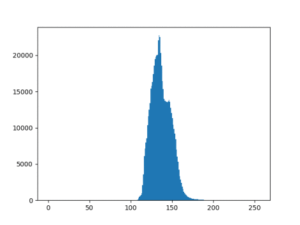 Ʈu – if gradient for a pixel lies above this value, it represents a strong edge

Ʈl  – if gradient for a pixel lies below this value, the pixel cannot lie on an edge

Canny classifies all pixels with gradient values between Ʈl and Ʈu as edges only if they are connected to strong edges. Assuming Canny as a system, our only task is to provide it with an input image and appropriate values for Ʈl and Ʈu. It will identify and output the edges for us. 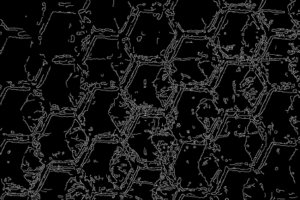 Without applying any transformation on the original image whose range is limited in a window of 40, determining Ʈl and Ʈu without generating false edges is cumbersome. With a small window, increasing or decreasing  either Ʈl or Ʈu by a single unit value has drastic impact on the edges detected. Without sacrificing hexagon edges, we obtained the best result on original with Ʈl   as 10 and  Ʈu as 20, as shown in illustration 3.

Though hexagon edges have been detected, many of them are connected with false and polluted edges.

One way of increasing contrast locally near the edges without affecting uniform patches is through unsharp masking. We can get a brief gist from the following steps:

Now when a pixel lies at a whitish edge with blackish pixels on the other side, Gaussian blur results in calculated intensity lower than current edge pixel. Hence α will be negative.

When α is negative, eq(3) states that intensity at pixel increases by half the value of α. Hence intensity of pixels at the edges is upgraded, making them more whitish thereby enhancing contrast locally. 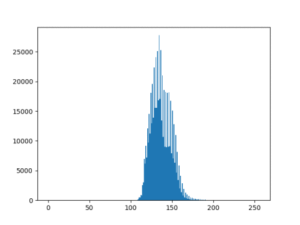 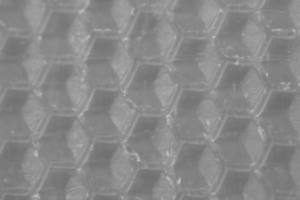 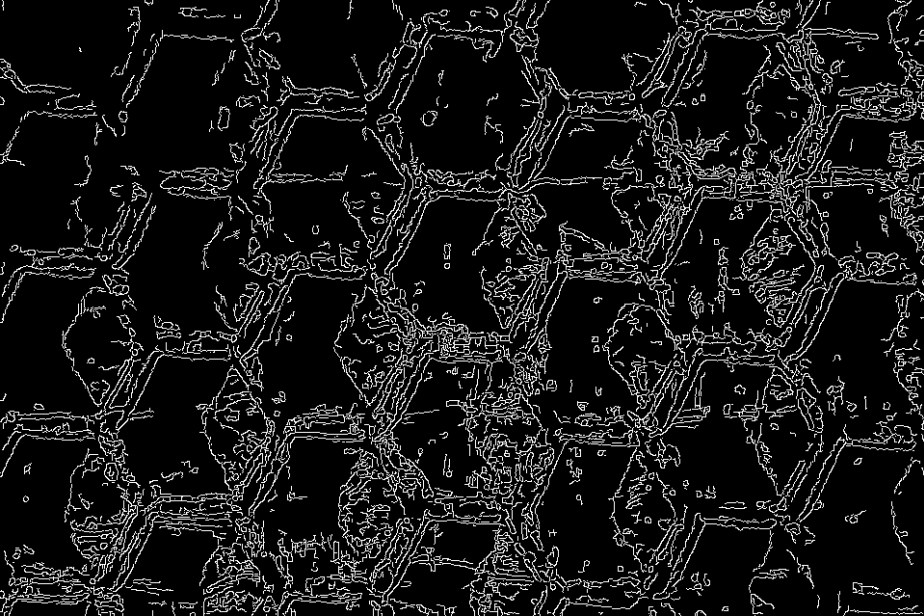 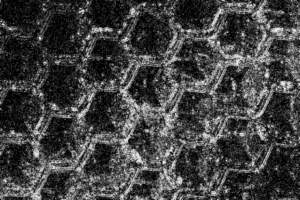 Illustration 7: bright pixels indicate the points where unsharp masking had an impact

Since unsharp mask does not change the intensity range, we can keep Ʈl and Ʈu the same as in the original image. But since it also sharpens the edge, it appears as if more polluted edges have emerged in comparison to illustration 3.

A common way to make dark pixels darker and keep bright pixels the same is gamma transform. The first step in gamma transform is to normalize the intensities.

Let us assume the following symbols:

To normalize, we divide a given intensity by the maximum value possible of intensity range.

When values between 0 and 1 are squared, they diminish further. Normalization reduces intensities as follows:

Squaring the normalized values brings in the following changes:

Now scaling back the reduced value completes the gamma transform:

As can be observed, dark pixel with values falling in 0 to 85 are gamma transformed to more darker intensities of 0 to 28. Brighter pixels closer to 255 remain almost the same, though slightly reduced. Hence gamma transform increases the contrast. 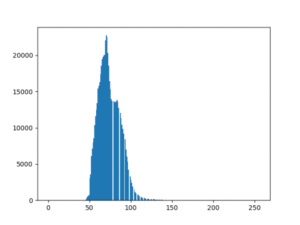 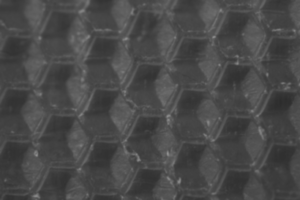 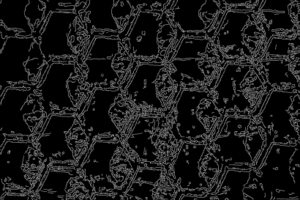 Illustration 10: edges on original after gamma transform with Ʈl  as 9 and Ʈu  as 19

Since the original intensity range itself was condensed, the output range after gamma transform did not have the expected effect. Instead of enhancing the contrast, it skewed all the pixel values towards 0. Hence the image in illustration 8 appears darker.

The intensity window has a size of approximately 50 which will again lead to the case of polluted edges being detected along with strong edges as depicted in illustration 9.

Let us now introduce ourselves to one of the widely applied algorithm for visualization. Let us assume the following symbols:

By normalization, hn(i) is mapped to values between 0 and 1. Hence the normalized histogram represents probability distribution of intensities.

The next step to achieve equalization is to transform the probability of each intensity into cumulative probability. To equalize, let us assume the symbol:

Beginning at 0th intensity, we will go on accumulating the probabilities:

As can be observed, any hcdf(i) lies between 0 and 1. The final step to equalize the distribution is to map values in range [0, 1] to range [0, 255]. Let us assume the following symbol:

Let us observe the effect on the original image. 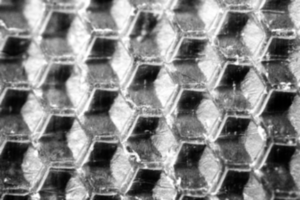 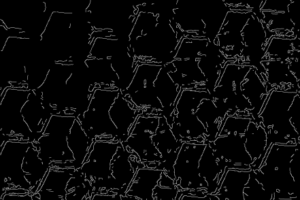 Illustration 11 symbolizes the impact of histogram

equalization. The histogram has been completely stretched and the entire available range of intensity is covered. This makes it possible to clearly define the threshold for strong edges and thereby minimize the presence of polluted edges.

Note how Ʈl lies at 113 and Ʈu lies at 150, in comparison to the previous values of 13 and 20 respectively. Lot of strong edges lie above 150 and to ensure weaker hexagon edges get detected, we have decreased the upper threshold to 150, implying we now have a greater control varying the threshold values.

As should have been apparent, combining all the three approaches provides us the best result. We applied histogram equalization first. Since the intensity is now distributed in its entire range, gamma transform can reach its maximum impact. Following it with unsharp masking will ensure the edges are further sharpened. Below are the illustrations of the result. 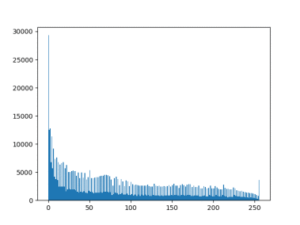 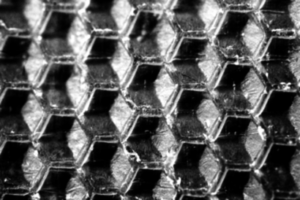 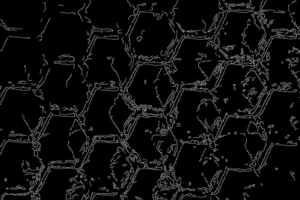 Illustration 16: edges detected after combining the three approaches with Ʈl   as 111 and Ʈu   as 194

Let us note how Ʈu has ascended to 195 and Ʈl is hovering at 111. At this point we have maximum control over varying the threshold values and can clearly distinguish strong and necessary edges from polluted edges.